M. ARRIBAS AND A. PEREZ, The Train of Memory 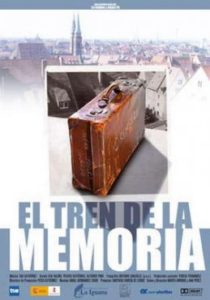 Millions of Spaniards left their homes and families in the 1960s to find a better future, driven by Spain’s lack of resources and the resulting economic situation. People living in rural areas moved to the cities, and many left Spain for other European locations (mainly France, Germany, Switzerland and Sweden) or for America. Marta Arribas’s and Ana Pérez’s 2005 documentary chronicles the Spanish migration to Nuremberg (Germany), dismantling the widely-held notion that on their arrival the emigrants encountered the promised land and were received with hospitality. The women and men interviewed in the film explain that they lived and worked under conditions of extreme hardship, and that they were treated like animals, despised and considered to be second class citizens by the Germans, who displayed an openly racist attitude towards them. The Spaniards were deemed by their hosts to be a necessary evil which would contribute to German economic progress. In contemporary Europe, many migrants are perceived in much the same way as the Spaniards and Italians were at that time. Millions of immigrants, primarily people from Africa and Latin America, arrive in Spain seeking a better future, only to be received with hostility; but it is important for us to remember that the Spaniards themselves have also been migrants. The rise in both Italy and Spain of extreme right-wing political parties propounding an openly anti-migration discourse is a stark reminder: Spanish forgetfulness that we were ourselves immigrants a mere fifty years ago may bring about racism today. The work of memory scholars such as Andreas Huyssen is a further demonstration that the investigation of memory helps us to diagnose the present. As Huyssen points out in one interview: “there is that other memory bearing down on us, and requiring new work and political intervention, namely the memory of fascist and racist populisms in relation to their current resurrection in countries around the world”. This memory, which aims to rescue an imaginary “pure” migrant-free past, conveniently elides over the fact that there is no such thing as purity: in the past we have all been migrants, travellers to host countries, and we continue to be so in the present.

Josefina Cembrero takes a train from Madrid (Spain) to Nuremberg (Germany), where she lived for many years. She is going to meet her friend Leonor, who works there as a social worker helping Spanish migrants. Like many others, both left their towns in Spain, fleeing poverty in order to seek a better future in Germany and thereby offer financial assistance to their families. Josefina and Leonor are part of a group of men and women that the Spanish Ministry has sent to Germany on special trains at the request of the German government, which needs factory workers. After several years, Josefina returns to Spain but many of these Spaniards remain in Germany, where they settle. The documentary recreates their lives during the 1960s and 1970s, alternating present day interviews and voiceover narration with historical footage and other images. The documentary questions the idea that Germany was really the land of plenty and the ideal destination that the emigrants, when they returned to Spain for holidays, pretended it was. The harsh reality of their migration, little understood until now, was that Spanish workers were treated as inferiors, and were received by the Germans with hostility.

According to Derrida’s reading of Kant’s essay Perpetual Peace, hospitality [Hospitalität (Wirtbarkeit)] means the right of a stranger [bedeutet das Recht eines Fremdlings] not to be treated with hostility [en ennemi] when arriving on someone else’s territory [seiner Ankunft auf der Boden eines andern wegen von diesem nicht feindselig behandelt zu werden]” (5). The documentary presents the audience with historical footage and photos of an impoverished Spain, a territory of dry lands with donkeys, of villages without electricity or running water, and of impoverished inhabitants. Travelling from the extreme poverty of areas such as Palencia or Extremadura, the migrants reach Germany by train in the hope of a warm reception, since their purpose is to work. However, when they arrive, they are treated like animals (even the trains, which are made of wood, evoke cattle transportation). In Hendaya, 3000 workers were forced to undergo a medical revision as though they were horses (they checked everything, “even the teeth” 12:32); there are images of naked people (reminiscent of a Nazi concentration camp) waiting to be examined and returned to Spain if any illness is found. The train is a space of transit where bonding takes place. United in this new adventure, the migrants share food, wine, and song, sleeping together in the cramped cars. Most are illiterate and were recruited because Germany needed cheap labour; others came with no work contract and crossed the Pyrenees on foot.

The fact that the documentary includes interviews with people who were direct participants in the events permits an analysis of witness testimony. In voiceover, Josefina explains that when they arrived in Nuremberg, they were welcomed at the station by a Spanish voice, announcing through the speakers that anyone throwing a glass onto the rails or platform would be fined by deduction from their paycheck. “They treated us as dirty people from the beginning. That was our first notion of being different”. The Germans offered them the right of asylum, but this right obliged the new arrivals to follow certain norms if they wished to be granted permission to cross the threshold. As Derrida says, “ if there is a threshold, there is no longer hospitality. (14). The common etymological origin between hostis as host and hostis as enemy, between hospitality and hostility, is what must be overcome: “Hospitality can only take place beyond hospitality, in deciding to let it come, overcoming the hospitality that paralyzes itself on the threshold which it is” (14).

As Victoria Toro recalls, the immigrants were received with “pieces of cardboard” displaying numbers on the front and back instead of names. She says that because they were young and naïve, they did not worry too much about this, but years later, she understood that there was a connection between these signs and the Jews in a Nazi camp. A woman recalls that she told people not to hang their labels from the neck, because they were the same labels that she helped her father put into sacks of potatoes. “We are not sacks of potatoes!” she shouted. Many later denied having arrived on that train and in such humiliating conditions, but as Leonor reminds us, 99.99% of people who came with a contract did indeed travel that way.

Their lodgings were barracks that had been used for cattle, and which later became a branch of the Society for the Protection of Animals. The black and white footage from the 60s alternates shots of an elderly couple walking around the now deserted premises, and recollections of how men and women, even married couples, were separated into two different barracks. Sexual relationships had to take place in the woods or in hotel rooms. The hosts’ “hostipitality” (hospitality and hostility), to use Derrida’s term, is evidenced by the fact that the employers provide lodging and work, but they also keep the immigrants separated from the rest of the population: “perhaps no one welcomed is ever completely welcome <in a welcome which is not justifiably hypocritical or conditional>, a performative contradiction which is unusual and confusing” (Derrida 6). Images of derelict apartments where the Spanish population in Nuremberg lived together after their first year are shown accompanied by German-language narration about the creation of migrant ghettos in the city. As examples of their lack of understanding of the German language, the migrants also recall their experience of eating dog or cat food, believing it to be canned meat, or of using laundry detergent as shampoo.

The narrative of the official No-Do (the documentaries of Francoist regime) with regard to the generous welcome of the Germans and their admiration for Spanish people and customs contrasts with the interviews with Spaniards recalling how they were treated in a racist manner. Italians and Spaniards were considered dangerous and threatening because of their dark hair and supposedly barbarian language. They were thought to be dirty, strong-smelling people. The interviewees recall fights in bars, as well as the fact that everything was forbidden to them. They were treated as slaves, working twelve hours a day in factories, and compared themselves with dogs. Those who worked in a chocolate factory were body-searched every day to ensure that they had not stolen anything. Although they were contributing to the development of the German economy, they were considered parasites of German society: Michel Serres, in Le Parasite, sees parasitism as constituent in any economic system, but especially in capitalism, where everybody is someone else’s parasite. It is not until 1968 that the migrants start to participate in unions and take political action in pursuit of adequate working conditions. The footage shown in the documentary, which allows the viewer to reflect on the memory of that conflictive past and draw comparisons with to the present, includes scenes from demonstrations and hunger strikes.

In this footage Leonor explains that, paradoxically, the “best” thing to happen to the Spanish migrants in Germany was the shooting of Basque nationalists by Franco in 1975, because this created a wave of solidarity among the Germans towards them. Suddenly, hospitality comes as a response towards the violence in the guest’s country. Operation Nation (Operación Patria) was designed by the Spanish regime to send food, wine and entertainment to the Spanish workers in Germany so as to quieten their anti-Francoist protests and keep their “patriotism” alive. But No-Do images carrying the official voiceover contrasted with the version of the migrants: “They treated us as if we were “deficientes” (mentally challenged)”, Josefina states. However, as the documentary shows, the solidarity and hospitality of the Germans was not to last long, because the 1970s petrol crisis in the country brought about the rise of xenophobic and neo-Nazi ideas. Open hostility towards strangers was fomented by right-wing politicians, who accused migrants of taking the jobs and privileges from the German population and essentially of being the enemy. Faced with open hostility, many of these migrants returned to Spain, sometimes to be met with animosity in their native country also, due to their lengthy exile and because Spaniards considered that those returning had now achieved a higher economic status than they themselves possessed, which was very often not true.

In El tren de la memoria the use of photos, footage from the 60s and 70s and the narration of direct participants in the events, both Spanish and German, helps to establish a dialogue between past and present, where the figure of the migrant can be analysed in relation to the hospitality received in the host country. Many of the factors mentioned in the documentary (treating foreigners as dangerous and menacing, considering them to be parasites, the rise of xenophobic attitudes caused by economic crisis, etc.) are still present in contemporary Europe. It is important to recall the past and not to forget, so as to be able to reach the impossible; as Derrida tells us, “It is necessary to do the impossible. If there is hospitality, the impossible must be done, this ‘is’ being in order that, beyond hospitality, hospitality may come to pass. Hospitality can only take place beyond hospitality, in deciding to let it come, overcoming the hospitality that paralyzes itself on the threshold which it is” (14). The analysis of this documentary in terms of memory/forgetting provides a valuable tool for a richer understanding of the importance of hospitality.

Eser, Patrick. “State of the Art in Memory Studies:  An Interview with Andreas Huyssen”. Politika. https://www.politika.io/en/notice/state-of-the-art-in-memory-studies-an-interview-with-andreas-huyssen