It's a Free World 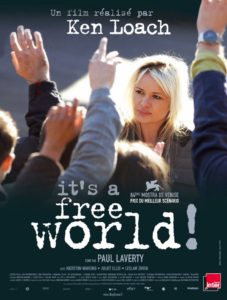 Ken Loach’s It’s a Free Word (2007) reevaluates the uneasy coexistence between British workers and Eastern Europeans migrants in the aftermath of the enlargement of the European Union in 2004. The film concentrates on three specific groups: Polish migrants recruited to work legally, undocumented Ukrainian workers, and an Iranian family who has been refused asylum. All of them converge in London to seek employment. Like González Iñárritu’s Barcelona, Ken Loach avoids the iconic images of London in his portrayal of Leytonstone, East London. In fact, the different settings of the film do not look very different from Katowice, the Polish city that opens the film, and from which migrants are fleeing in search for a better future (Hill 2011, 193). These first scenes of the film, which show the protagonist, Angie, interviewing for a British recruitment agency, foreground the fact that immigration is not the result of an individual’s actions, but is part of a more complex set of circumstances that implicate directly the receiving country, which is an active partner in the process. As Saskia Sassen states, “international migrations are embedded in larger geographical and transnational economic dynamics” (1998, 8), a pattern characterized by the emergence of a global economy that has contributed both to the creation abroad of pools of potential emigrants (1998, 34), and to the increasing supply of low-wage jobs, mainly temporary and part-time jobs. This is the process that Sassen terms the “casualization” of the labor market, and that has facilitated the absorption of rising numbers of immigrants. What is specific about It’s a Free World is its excavation of the mindset and the logic that support the casualization of the labor market and the ruthless exploitation of migrant workers. The exploiter, Angie, and her partner, Rose, are not so different from those being exploited (Hill 2011, 193), at least initially.

The story opens in Poland and closes in Ukraine. In between, it traces Angie’s transformation from working for a recruitment agency that hires legal Polish workers, to running her own agency with her partner, and exploiting both legal and illegal migrants. She experiences sexism and abuse as a worker, but this experience does not prevent her from exercising a similar kind of abuse when she is in a position of power. Workers are interchangeable by definition, and she shows no moral qualms in using them as long as she can make a profit. She becomes strictly transactional. Workers are hired by the hour and may or may not be paid at all, but she feels she is giving them an opportunity, considering the conditions they fled in their home countries. Although she welcomes a family of Iranian refugees in her home for a day when she sees the dismal conditions they live in, she calls the immigration authorities to report a caravan site of migrant workers when her interests are at stake. As she admits to her partner, Rose, right before they part ways, there is probably nothing she would not do to pursue her own goals. The only qualm is the fear of getting caught. Neither Rose nor Karol, the kind young Pole she employs, manage to divert her from her own personal and material interests. Her initial decision to employ only workers with papers gradually gives way to a much more ambitious plan to recruit undocumented workers from Ukraine, allegedly the kind of submissive individuals that raises no questions and never complains.

Just as the film shows a British agency going to Poland, so in early 19th century Britain agents were set up by the Poor Law Commissions to recruit the unemployed in the villages of the South-western counties of England and dispatch them to Manchester (Berger and Mohr 2010, 112). In fact, Britain was the first industrial power to have large-scale recourse to migrant labor from another country. After the 1845 famine, hundreds of thousands of Irish peasants crossed the sea to Liverpool and Glasgow and lived in Irish ghettoes (Berger and Mohr 2010, 112). The advantages of immigrant labor were easy to grasp: “The migrant worker comes to sell his labour power where there is a labour shortage. He is admitted to do a certain kind of job. He has no rights, claims, or reality outside his filling of that job. While he fills it, he is paid and accommodated. If he no longer does so, he is sent back to where he came from” (Berger and Mohr 2010, 62). Upon arrival to the host country, the migrant worker undergoes a transformation that codifies him or her as inferior, a status he is accorded “naturally” “by people, by institutions, by the everyday etiquette of the metropolis, by ready-made phrases and arguments” (Berger and Mohr 2010, 117). This automatic codification as inferior makes of the migrant the ideal worker for the global and flexible market: “He is eager to work overtime. He is willing to do shift work at night. He arrives politically innocent …” (Berger and Mohr 2010, 142). The experience of the migrant worker, then and now, is for Berger and Mohr related to “unfreedom” and to neo-colonialism (2010, 11, 45). Unsurprisingly, the authors claim that “To re-become a man (husband, father, citizen, patriot) a migrant has to return home” (62). That is Karol’s decision at the end of the film, as he explains to Angie: “I’m a man, I’m not a servant”.

From “The Rainbow Way” to the “Abjection Machine”

In Extinct Lands, Temporal Geographies, Mary Pat Brady argues that “National borders utilize the fantasy that a nation on one side of the border exists in one phase of temporal development while the nation on the other side functions at a different stage. Moreover, borders simultaneously produce and elide this difference between nations, implicitly suggesting that a person can be formed in one temporality but when he or she crosses a border that person transmogrifies, as it were, into someone either more or less advanced, more or less modern, more or less sophisticated” (2002, 50). It’s a Free World dramatizes the mutation whereby a person from Poland or Ukraine is reconceptualised as different on the other side of a particular border. The Rainbow Way Angie and Rose’s recruiting agency uses as logo depicts an imaginary arc or division that would transform the crosser into someone more advanced and sophisticated. With its vivid colours it suggests a passage through the mirror into an ideal reality. However, this expectation of amelioration is frustrated on regular basis. As migrants cross national boundaries they do not go through a magical rainbow, but through what Brady calls terms the “abjection machine” that transforms people into “aliens,” “illegals,” “wetbacks,’ or “undocumented,” “thereby rendering them unintelligible (and unintelligent), ontologically impossible, outside the real and the human” (2002, 50), interchangeable and disposable. Just as David Harvey claims that cups, cutlery, packaging and napkins became disposable after the 1960s (1990, 286), the film shows that this transformation extends to workers, who become automatically disposable. Polish and Ukrainians are ripped off and taken advantage of, transformed into a submissive work force of “casuals,” as the pub owner calls them. Other than Rose, Angie’s father, and a group of concerned teachers at the school Angie’s son attends, no one is particularly sensitive to this transformation. In spite of Angie’s assurances to the prospective workers in Poland, “We can guarantee you work” and “good, clean accommodation,” what the migrants find, in Karol’s words, is that the accommodation was shit, the bus trip was shit, the job was shit and that the agency kept the £250 fee. The caravan site where he is housed, along with other migrants, represents a Third World in London, as he claims.

Making a home in the city proves to be difficult or impossible. “City or suburb, centre or periphery” are always depicted as hostile environments (Millington 88). Just as migrants are resignified as they cross borders, their presence rearranges the meaning of traditional places in London. The back yard in the pub, the traditional center of public life in England, becomes the place where migrants are gathered and assigned jobs. Angie faces the growing number work seekers picking out the most suitable worker for each job, classifying them, and rejecting the rest as “liars”, “too old”, or “living in a dream world”. The deal she strikes with employers is always the same: Eastern European workers can work overtime, shift work, evening, all the time. Other than the pub, the other striking transformation of place in the film is the renting of apartments to migrant workers. Rose initially fantasizes, calculator in hand, about the possibility of renting a house in the middle of nowhere and hot-bedding. The mere thought of it is disgusting, as she admits, yet profitable, and it turns out to be another source of income for the two women. The idea is not new, but it is the most extreme manifestation of inhospitable lodgings, as Berger and Mohr document in A Seventh Man: “Those who let out the most miserable rooms to migrant workers are called sleep-dealers (marchands de sommeil). In a small room for one person (a maid’s room a century ago) three beds have been arranged. Nine men sleep in these three beds by the arrangement of working different shifts” (Berger and Mohr 2010, 94). Significantly, the patterns that Berger and Mohr document in the 1970s are still prevalent in the 2000s.

The caravan sites where Angie meets with Karol and the Iranian family are further examples of the third world within London, of the outside within the inside. Appalled at the conditions the family lives in, Angie welcomes the family in her apartment for a day. After that, they return to the site. When Angie needs to find a place to house a group of undocumented Ukrainian workers towards the end of the film, she goes back to the site but it is still occupied by a group of families. In order to evict its current tenants, she calls the immigration service, allegedly on behalf of a concerned group of citizens, and alerts them to the presence of undocumented immigrants at a camp site. This image of the migrants behind a fence stirs up memories of how fencing off groups deemed different has played a role in European history. The call marks the turning point for Rose, who finally leaves her partnership with Angie.

Rancière argues that films are best when they do not tell the spectator what to think, but when they treat the spectator as an intellectual equal (Hill 2011, 144). Critics have noted that Loach and Paul Laverty, his frequent screenwriter, have a habit of speaking for their characters, rather than through them, and of believing that the audiences for their films aren’t as politically sophisticated as they are (Dargis 2008), yet It is a Free World opens new vistas into the mind of the exploiter and how the chain of exploitation continues. Since, as Berger and Mohr claim, “the language of economic theory is abstract”, and so are the forces which determine the migrant’s life, a less abstract formulation is needed (2010, 45). That concrete formulation, is what the visuality of the film with its attention to bodies and places and their encounters provides. The film also puts to the test the consequences of the encounter with the Other. Meeting the other does not imply a refashioning of the self in relation to the Other but a reaffirmation of individualism and personal interest. Neither Rose, nor Angie’s father nor Karol, the bearers of morality and idealistic values (Heuckelom 2013, 222), manage to prevent Angie’s descent. Similarly, her opening the doors of her apartment to the Iranian family does not lead to a personal epiphany or a reevaluation of the self. The act of individual hospitality does not set out new modes or interaction nor does it affect the way Angie looks at immigrant families.

Millington, Gareth 2016. Urbanization and the Migrant in British Cinema: Spectres of the City. London: Palgrave.

Sassen, Saskia 1998. Globalization ant Its Discontents: Essays on the New Mobility of People and Money. New York: The New Press.