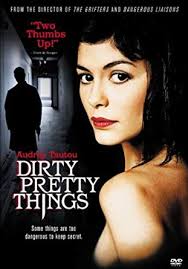 Stephen Frears’s Dirty Pretty Things (2002) casts a social realist look at illegal immigration and organ trafficking operating in London’s underground economy. Set in London’s working class neighborhoods, the film follows the Dickensian tradition of exploring the dark, depressed corners of the metropolis to reveal the hidden social and economic forces that sustain it. By escaping the over-filmed, iconic sites of London and setting his film around a hotel with immigrant workers and cosmopolitan travellers, British director Stephen Frears contrasts the nature of British hospitality towards financial elites with the inhospitality towards invisible migrants. The hotel becomes a particularly appropriate site for the exploration of national hospitality towards strangers not only because the hospitality industry is one of the central points of destination for strangers and immigrants but also because the hotel is an adequate metonym for the nation, equally receiving guests and keeping the right of admission. However, rather than exploring the geopolitical divide between British citizens and the precarious lives of marginalized migrants, the film offers a radical critique of the hidden “dirty” relations of exploitation and oppression that support western economies. The plight of the undocumented migrant in the global city is allegorically represented as a struggle to not be consumed by the cannibalistic forces of Western capitalism (Davis 48).

The movie centers on the Baltic Hotel in London, where migrants of many different origins come together. We follow the experiences of Okwe, a Nigerian doctor, and now undocumented immigrant in London, who drives a cab in the daytime, and works at the hotel at night. He shares an apartment with Senay, a Turkish woman seeking asylum. Okwe and Senay navigate the underground economy of immigrant labor in the global city of London, where they constantly face the threat of commodification of the immigrant body: either by being compelled to provide sexual favors, or even to sell a bodily organ. Okwe and Senay accidentally unveil a clandestine organ trafficking operation led by the hotel manager, Señor Juan, also known as Sneaky, a dodgy fellow of Spanish name. As part of the organ harvesting and sales operation, undocumented migrants are coerced into selling their organs in exchange for a fake passport and a legal identity. The film offers a different view of immigrant mobility, where the transgression is relocated from the crossing of national political boundaries to the opening of the boundaries of the immigrant body.

In one telling scene, Okwe and Senay are shown in an underground parking garage to hand over an item—which we know to be a freshly harvested human kidney—to a well-dressed white man. To the man’s question, “How come I’ve never seen you people before?” Okwe replies, “Because we are the people you do not see.” As invisible, exploitable migrants, Okwe and the other undocumented migrants figure as embodiment of Butler’s image of “spectral beings”, those with no names, no faces, and no family, the civil dead who occupy the non-places of the metropolis and yet serve as its lifeblood. (Butler 2004: 33).

The film establishes and dwells on the perverse split between natural life and political life, zoe and bios (Agamben 1998). These two inseparable sides of the self—if we assume Aristotelian ethics—follow divergent paths in the film. For the undocumented immigrants, the road to a unified political identity comes to rest on the fragmentation of the natural, physical self. The natural life is sacrificed at the altar of the political; natural life can only aspire to full political presence by risking its own disintegration. The film offers a new approach to the traditional postmodern motif of the multiplication of the identity of the subject, as it represents the devastating fragmentation of the undocumented migrant’s body. In the absence of a national citizenship and a coherent political identity, the subject is reduced to little more than a collection of body organs and labor skills that fail to cohere into a whole and well-rounded human subject.

Of Hosts and Parasites

Frears’s film works against the background of deep-rooted views of ilegal immigrants as parasitically feeding on the British welfare system. Former British PM Tony Blair declared in 2005 that British traditions were “under threat from those who come and live here illegally by breaking our rules and abusing our hospitality.” Blair was invoking a widespread biological analogy, in which undocumented immigrants figure as parasites, living on and in the body of a national host which provides nourishment and shelter, and to which they cause some harm. Frears’ film responds to the troubling silences implicit in such views by focusing on the exploited and undocumented migrant workers, the ghosts of British economy who occupy the invisible spaces of the hospitality industry. Dirty Pretty Things significantly shifts the narrative perspective: rather than centering on the national hosts and their anxieties over presumed invasions from migrant Others, we witness first-hand the experiences and concerns of marginalized and silenced guests.

Zygmunt Bauman famously considers mobility as a highly stratifying principle of the new global order. “If the new extraterritoriality of the elite feels like intoxicating freedom,” Bauman claims, “the territoriality of the rest feels less like home ground, and ever more like prison” (1998, 23). Frears’s film illustrates how mobility and immobility are ineradicably intertwined. The very first scene of the film presents Okwe, who as a cab driver, or an agent of local flows, is soliciting passengers at Heathrow airport, the site of global flows. As undocumented migrant without a legal work permit, Okwe is confined within the exploitable margins of the nation, trapped in his own immobility; in contrast, the cosmopolitan travelers he serves enjoy a form of legalized, sanctioned mobility. When Okwe remarks to some potential clients, “I am here to rescue those who have been let down by the system,” the ambiguity becomes self-evident. Rather than pointing towards travelling elites in need of transportation, the remark refracts back on Okwe himself, who figures as the “abandoned being,” the individual who has been let down by the system.

Though the issue of migration tends to be seen within a state-centric political imaginary, with state borders as sites of fortification and transgression, Frears film decenters the border dynamics. The film illustrates E. Balibar’s contention that, in the globalized world, the border is no longer on the margins but has moved “into the middle of political space” (2005, 109). The Baltic hotel emerges as a microscopic replica of the nation-state. It refracts the practices and politics of the nation itself, with its margins and its centers, its hosts and guests, its areas of visibility and invisibility, and its right of admission. Okwe and Senay are spatially confined to the less visible parts of the hotel—the basement, the kitchen, the parking garage—in contrast to the lobby, used by guests. The microscosmic partitions of the hotel are then refracted on the city itself, as we follow Okwe’s daily itinerary through London. In order to reach Senay’s apartment, for instance, Okwe has to cut through the back of a convenience store and go up a fire escape, visually recreating his displacement and non-belonging.

However, rather tan focusing on border geopolitics, the film centers on the spatial partitions resulting from the global political economy. State-oriented modes of space and identity give way to capitalist relations of power and exploitation within the city of London.

Bare life of the undocumented migrant

In a very telling scene, Okwe is seen jumping off the window in Senay’s apartment to escape from the sudden visit of a pair of immigration officers. The fear of being deported makes Okwe run out through the window, without time to collect his shoes. The image of Okwe walking barefooted on the streets not only points towards the vulnerability of the illegal immigrant, and to his mere survival instincts. Giorgio Agamben famously qualifies undocumented immigrants and refugees as nuda vita, “bare life,” existing at the “zone of indistinction” between inclusion and exclusion. That is, life which exists within the juridical order only by being actively excluded from it. This is Okwe’s image on the streets of London, with bare feet, excluded from the London apartment.

In his well-known theses on “Perpetual Peace” (1795-96), Immanuel Kant sees international trade as a guarantee against hostility towards strangers, since it is in the mutual self-interest of nation-sates to act hospitably towards visitors (Shapiro 2009). Dirty Pretty Things shifts this problematic from the space of the nation-state to the relationships between vulnerable and exploited migrants, wealthy cosmopolitan travellers, and dominant and exploitive crooks. The film explores the perverse dynamic of the free capitalist flow of goods as opposed to the constrained flow of migrants and refugees. It takes this one step further in representing a world of flows where the person’s mobility remains blocked, but his body organs enjoy undeterred movement. If Derrida (2000) variously claimed that hospitality lies in the “opening” of the self to the other, the film gives this opening a new sinister look, as in this case it is the guest who opens his body to the foreign intervention of the host.

Hospitality thus reveals its true face not as a voluntary, unconditional giving away, a gift that bespeaks of a generous relationship with the other; rather, Dirty Pretty Things underlines how the migrant experience contradicts the parasitical readings of official political discourse. The film rewrites the familiar pattern of hospitality, which compels us to identify migrants with guests and target countries with hosts, by linking this migratory process with the migration of organs leaving one body and being absorbed into another. The body becomes a material commodity devoured in a global economy of exploitation and consumption. As migrants provide the organs that will be hosted by the national body, the foreign guest instills new sap and a new life on the decaying national host. Rather than hospitality being grounded on a generous discourse of self and other, respectful of differences, the film gives us an ironic version of migrant incorporation into the body politic. “Incorporation,” from Latin incorporare, literally meaning “uniting into one body,” is represented in the film as cannibalistic hospitality. As the body of the Other is consumed, literally absorbed into the body of the self, the guest nurtures and makes the life of the host possible.

At the end of the film, Okwe finds out that, in her desperation, Senay has given in to the hotel manager’s demands and is trading her kidney for a fake passport. In a significant power reversal, Okwe manages to drug Sneaky and surgically remove his kidney instead of Senay’s, finally collecting the money they need to secure their fake passports. In this unlikely happy ending, the film envisions a form of micropolitical resistance to macropolitical capitalist structures. The exploited, those who represent bare life, become political subjects through their successful, almost invisible challenge to the hotel’s dirty business. The radical instability of hospitality, that of hosts becoming guests, of hosts becoming hostages, is thus temporarily reinserted into political space.

In “Perpetual Peace,” Kant proposed that the state be granted the authority to offer or deny hospitality to foreign visitors, and mostly as part of a reciprocal agreement with other states. Frears’ film relocates the scene of hospitality beyond state-oriented geopolitics. The national border, generally assumed as inescapably porous in the new globalized world, is no longer the central site of abjection. It is true that Dirty Pretty Things begins and ends with border scenes at the airport, but the whole action takes place in the economic underworld of London. Border dynamics get replicated on a daily basis in the perverse spaces of capitalist exploitation. Migrant hospitality is no longer a generous personal welcoming of the stranger, nor even a national policy issue to be ritualized at the border. It is now, as the film seems to propose, located beyond geopolitical discourses on global space, and situated at the heart of an economics of inhospitality. An almost invisible economics that the film manages to expose.