Today immigrants appear as threatening outsiders, knocking at the gates, or crashing the gates, or sneaking through the gates into societies richer than those from which the immigrants came. The immigration-receiving countries behave as though they were not parties to the process of immigration. But in fact they are partners. International migrations stand at the intersection of a number of economic and geopolitical processes that link the countries involved; they are not simply the outcome of individuals in search of better opportunities. Part of the problem of understanding immigration is recognizing how, why, and when governments, economic actors, media, and populations at large in highly developed countries participate in the immigration process

I exist through the other and for the other, but without this being alienation

Emmanuel Levinas, Otherwise than Being: Or Beyond Essence 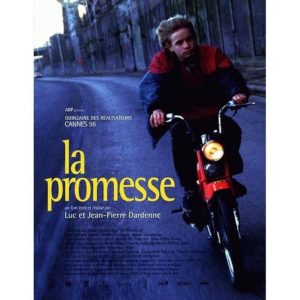 The Dardenne Brothers’ La promesse (1996) dramatizes the different faces of Belgian multiculturalism and the uneasy coexistence of Belgians and immigrant workers at a time of high unemployment rates (Mosley 2002, 164) A series of circumstances, such as an increase in illegal immigration, global labor mobility, and the relaxation of border protocols, makes it possible for Roger to earn a living by trafficking in migrant workers. Set in the postindustrial era, as the early shots of abandoned factories reveal, the film dramatizes how the supply of migrant workers provides new ways of making a living in parts of Belgium where traditional jobs have disappeared (Mosley 2002, 164). The film presents the fact that illegal workers are inseparable from illegal employers (Rosello 2001, 137), thus reminding the viewer that, as Saskia Sassen remarks, immigration-receiving countries are active partners in the migration process. In spite of this partnership, the film shows everyday racism and exploitation, as migrants are abused for no apparent reason other than their mere presence (Assita, an African woman, is urinated on by two men), or are moved around like pawns with total lack of agency. Their lot seems to always be in somebody else’s hands even if they are constantly shown giving money to Belgian handlers. The portrayal of immigrants, however, is unsentimental, and the film shows the migrants contesting exploitive practices.

Igor, a teenager, helps out his father, Roger, to renovate a house outside Antwerp, Belgium, that employs and exploits illegal immigrants as part of an international network of traffickers. He also works at a car shop and gas station. One day, when government labor inspectors appear at the site, Hamidou, an immigrant from Burkina Faso whose wife and baby have just arrived, falls from a scaffold. His injury becomes mortal because Roger unties the tourniquet and refuses to take him to a hospital. Instead, he drags him out of sight. In his final words the man elicits a promise from the boy to look after his wife and baby, hence the title of the film. When Igor begs his father to take Hamidou to the hospital, Roger flatly refuses because of the legal consequences. Instead, he forces his son to help him hide the body and bury it in cement. The film does not reveal if Hamidou was dead or alive when he was buried. Eventually, Igor has to make a choice between being loyal to his father or being true to Assita. This divided and conflicted play of alliances, the protection of the father by not telling Assita that her husband is dead, and the promise to protect her and the baby are held in tension throughout the film and trigger the action until Igor is finally forced to make a choice.

The second sequence of La promesse shows a group of migrants climbing down from an automobile transporter in front of an abandoned factory. After they get descend from the cars, they are shown boarding Roger’s van. Although it is clearly not a pleasure trip on a tourist bus, the group receives a timid welcome to the country. “Belgium, beautiful country,” Roger claims, while Igor adds, “The Meuse. Big factories. Much money,” as the van drives through abandoned factories. These abstract promises of prosperity, the ones that propelled them to start the journey, will be ostensibly frustrated, for the migrants will find neither beauty nor money. The places of hospitality the migrants encounter are falling apart and are entirely substandard, in spite of the extremely high rents they pay to Roger. As contractor and landlord, Roger supervises everything: the doctoring of documents, demanding money for the trip to Belgium or extra rent for heat, and forcing some of the immigrants to repair the house he is saving up to buy (Mai 2007, 133). He also pre-arranges police raids to appease the local authorities and public opinion. Immigrants think they are being shipped off to America but in fact they are given up to the police.

When Hamidou fatally falls from a scaffolding, his body is covered with one of the many doors that are lying around or propped against the walls. The presence of doors reminds the viewer of the many doors the journey to Belgium would ideally open for the immigrants, as the initial description of a beautiful country and the abundance of money indicate. However, the film uses the implications of a door open to nowhere, or, more precisely, to a dead body. The door covering the body becomes a lid to a non-coffin (Rosello 2001, 142). The fact that Hamidou is buried in concrete is also revealing. His work, along with the other migrants’, is part of the invisible economic scaffolding of the country. When he falls off it, he literally ends up being part of the house itself. Thus the film presents the literal transformation of the immigrant’s body into “a piece of cheap raw material imported from the colonies” (Rosello 2001, 142-143). His life, entirely up to Roger, once again illustrates the lot of migrants who are inside the country but inhabit different manifestations of the outside. He is abandoned and entirely disposable (Nancy, Bauman). His incorporation into the structure of the house shows a particular kind of integration, “a monstrous form of absorption” (Rosello 2001, 143) that can be qualified as “cannibalistic hospitality”, the kind that gobbles up not just the migrant’s work but also his or her body.

Hamidou’s body, dead or alive, and even when transformed into part of the house where the group of migrants work, haunts the film. It is a constant reminder of the element of power that presides over the guest-host relationship, and of the kind of dissolution that Hospitality sometimes demands from the migrant (Cf. Rosello 2001, 30-31). Hamidou becomes a figment of colonial power, visually incorporated into the structure he contributes to creating. Even if the film situates the migrants in “a deterritorialized global economy in which circuits of production and hidden centers of power often treat workers and immigrants as commodities, imported and exported to increase productivity” (Mai 2007, 133) the Dardennes’ emphasis on the body brings into focus how the remoteness of economic forces have a local effect (Mai 2007, 133) As opposed to the invisibility of Roger’s contacts and collaborators, the directors reveal the details of the “dissimulations of the global economy” (Mai 2007, 138). What the directors offer is a “tactile vision” (Mai 2007, 138) that reveals the undeniable presence of the bodies, with the camera frequently filming in close proximity to them and opposing their invisibility (O’Shaughnessy 2005, 80).

Hospitality and the Non-home

One of the first scenes of the film shows Igor being taught how to solder at the car shop. He cannot complete the job because he is summoned by his father, who is on his way to pick up the migrants. The scene turns out to be symbolic, for Igor will be in charge of soldering the gap with Hamidou’s widow and son. When Roger gets ready to drive Assita to Cologne, in theory to reunite with her husband, Igor steals the van and drives off with Assita and the baby. Roger, Igor admits to Assita, just wanted to sell her to a prostitution ring. Significantly, Igor takes her to the car shop, the place where the soldering was interrupted, since the owner was away for the week-end. It is the only place where he can administer the rituals of hospitality since there is no longer a home for either of them. The odd trio will be shown constantly on the move: at a police station, where Assita reports her husband is missing; at a hospital to treat the baby’s fever, and at a healer’s home. The “out of place-ness” traditionally associated with the migrant-guest now falls on the host (Rosello 2001, 141). Thus, the film starts to refashion the relationship between two previously predetermined roles, the exploiter and the exploited, the host and the guest, the native and the foreigner, the European and the African. This is the soldering or encounter the film fashions so that Igor does not lose his humanity because of preexisting roles (Cf. Rosello 2001, 137).

Encounter with the Other

The encounter with the Other is at the heart of Emanuel Levinas’ philosophy. Articulated in Totality and Infinity and evolved in Otherwise than Being, Levinas proposes the constitution of the subject as an identity through the relation to the Other. This is the relation that the promise to Hamidou activates, and that will gradually unfold as the characters reach across boundaries of nationality, race, culture and religion. Igor seems to find his identity through his act of responsibility towards Assita. For Levinas, the subject’s unicity or identity can neither be established nor justified on its own terms through a logic of autonomy; rather it is established by way of a relation. This occurs because, in Levinas’ view, the subject is unique and irreplaceable in his obligation, his duty, his absolute responsibility for the Other and for the Other’s welfare: “Here the identity of the subject comes from the impossibility of escaping responsibility, from the taking charge of the other” (2009, 14). This act of responsibility stands before any other commitment: “Responsibility for the other . . . is prior to freedom” (2009, 116). Responsibility to Assita takes precedence over Igor’s loyalty to his father, as the last scene in the car shop, where Igor literally chains his father, illustrates.

In spite of Igor’s moral choice, he still hides the fact that Hamidou is dead. It is just when he does not need to tell her, for she is about to take a train to Carrara, Italy, where Hamidou’s brother lives, that Igor finally makes the revelation. It is a key point in the movie that marks a real beginning, a real open door for the two characters. Even if Igor was helping Assita and the baby, he did so from a position of superiority. He was protecting her by “displacing her body, by preventing her from being exchanged” (Rosello 2001, 147) but there was no real exchange between them. The revelation, however, makes her an “equal partner” and a “real interlocutor” (Rosello 2001, 146, 145). Igor’s decision frees him from his loyalty to his father, yet there is no clear exit, as the trio retrace their steps away from the station. In an interview, Luc Dardenne explained that what the directors have inherited from the documentary format is the feeling that there is a reality that precedes and goes beyond the camera. It is what he calls “cette résistance de la matière” (2002). When Igor and Assita are seen walking away the film it shows the reality beyond the camera that overfills any framework.

Levinas, Emmanuel. 2009 (1974). Otherwise than Being: Or beyond Essence. Translated by Alphonso Lingis. Pittsburgh: Duquesne University Press.