Every state is born of violence, and state power endures only by virtue of violence directed towards a space. . . . A founding violence, and continuous creation by violent means . . . such are the hallmarks of the state.

— Henri Lefebvre, The Production of Space 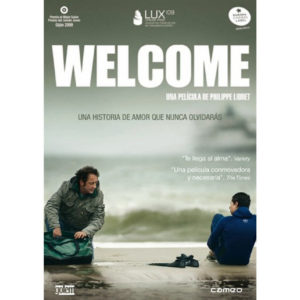 Philippe Lioret’s movie Welcome shows a fascinating intersection of migration, borders and hospitality/hostility. Ever since the European Union eased the inner transit between and among its members, there is a feeling of increasing borderlessness. This blurring of checkpoints, however, constrasts with an alternative vision of Europe as a fortress against non-members. This is what the young protagonist of the film, Bilal, encounters. The “welcome” the film announces is never such. The movie illustrates the hostile reception to migrants in Europe, as well as the contrast between private and public hospitality. It also illustrates the figure of the unwanted “guest,” abandoned and harassed. In depicting the different spatial practices of the characters, the film displays deeply segregated geographies, the polis, the space of the citizen, and the mobile camp, the space of the Other. Another relevant aspect in the film is its depiction of the French citizen’s commitment to a young migrant, Bilal. There is open hostility and violence towards the wayward Other in the film, but also to the citizen that welcomes the Other.

Set mostly in Calais, the movie portrays a 17-year-old Kurd’s efforts to cross the liquid line that separates him from Dover and Britain, the promised land where his Kurdish sweetheart, Mina, now lives with her family. Compared to the three months traveling on foot from Mosul, Iraq, the English Channel does seem like a last short stage of the trip. As he arrives in Calais on a winter day, he calls his friend Mirko, Mina’s brother, to tell him confidently that he will catch a boat and arrive in London the following day.

These first scenes point at Bilal’s ignorance as to the rituals of passage in Europe. As he asks a group of men the way to the harbor, they ask back where he wants to go. His answer, “to England,” is followed by a bout of laughter, followed by the mock question, “Did the Queen invite you?” and the recommendation to travel first class. Bilal, like the group of men he addresses, is part of the “political abject” (Duvall, et al. 2009, 229) that roam around Calais but cannot go anywhere. The images around Bilal are, indeed, deceiving. Boats constantly crisscross this strip of water; the Eurostar makes a quick dash between mainland and England; phone connections are instantaneous. The liquid line just bars the physicality of certain crossers. France and Great Britain have solidified their borders to foreigners at the same time that Europe’s inner frontiers have turned into mere formalities. What Bilal is about to encounter is a section of what Étienne Balibar terms the “Great Wall of Europe” (2006, 2). If, as Lefebvre argues in The Production of Space, “Every state is born of violence” and this founding violence is one of the hallmarks of the state, maintaining the physical and political integrity of a state requires the constant vigilance and policing of its borders.

Bilal and the hundreds of refugees that gather in Calais represent a “shifting boundary,” as Bhabha would put it, that is never going to be admitted to the Heim, the domestic spaces of France or of any country. They are within the borders of the European Union, yet they do not belong anywhere and are not accepted anywhere. This being part of the outside while on the inside suggest a new subject position that Mezzadra and Neilson call “differential inclusion,” that is associated to “varying degrees of subordination, rule, discrimination, and segmentation” (2012, 67). Although surrounded by the constant and expedited passage of goods and capital, the men live in utter immobility, harassed, as the movie shows, along a geography of non-places, from the harbor to the jungle, a makeshift camp. The refugees are the representatives of Agamben’s “homo sacer”, Nancy’s “abandoned being”, Kristeva’s concept of “the abject”, Butler and Spivak’s notion of “spectral beings”, and Bauman’s concept of “the disposable”, the surplus population that does not fit anywhere. They are just nobody’s guests.

Finding a way out is Bilal’s priority. As he awaits in line for warm food provided by volunteers he recognizes a friend from Mosul, who had claimed he was already safe in England. He did so, he confesses to Bilal, because he did not want to worry his mother. He had been in Calais for ten weeks. Another Kurd had been there for three months. These are the first intimations that the stretch of water that separates Bilal from Britain is not easy to traverse. In a fast-paced conversation, Bilal goes over all the possibilities of crossing the channel. He tries his luck on a truck. Everything runs smoothly until the truck enters the busy Calais pier and undergoes individual inspection and migrants put plastic bags over their heads to foil high tech sensors especially designed to detect motion and body heat. The image of the hooded men reveals one of the basic tenets in this era of supermobility: borders are closed to humans but not to goods and merchandise. In the midst of the inspection Bilal has a panic attack and gives the group away. Bilal is returned to Calais. Swimming across the Chanell becomes his only option.

The city is described as an uneasy contact zone where interaction between citizens and non-citizens, a contingent made up of Afghans, Kurds, and Pakistanis, among others, has turned problematic. The migrants are within the country, but find a segregated society, striated across lines of nationality, religion, and culture. They occupy what we can call the spaces of hostility in the film and move between police harassment or open violence, and the constant aid of French volunteers. We will concentrate on three specific places of interaction.

Seemingly unaware of these invisible lines that striate the town, Bilal shows up at a public pool. Significantly, the pool contains a liquid line that allows contact. It is a synechdochic equivalent of the channel, if in a contained and manageable fashion. The colors of the rope Bilal holds onto, white, blue, and red, remind the viewer of the national character of the liquid line he is trying to cross. A laconic instructor, Simon, agrees to give him two swimming lessons.

Outside the pool, a space code separates citizens and non-citizens. The movie shows one instance in which two young men are banned from entering a supermarket by a security guard because, the manager claims, they upset the customers. The supermarket thus morphs into a checkpoint away from the geopolitical border that replicates similar parameters of detention and selection. While Simon does not interfere, his exwife confronts both the manager’s xenophobic attitude as well as Simon’s indifference. She also reminds the latter of what it means to ban certain groups of people from shops and how that played out in the history of France. The reference to detainment and containment points at the presence of camps in French history, from the confinement of Spanish Republicans after the fall of Barcelona to the instauration of the Vichy regime and the detention of communists and Jews (Fassin 2005, 378-379).

In spite of these instances of hostility, Simon picks up Bilal and his friend when he sees them on the street, and invites them to stay for the night. It is a surprising and unexpected move on Simon’s part. He just wants to impress his now exwife. Thus Simon opens his home to the Other and extends the gift of hospitality. Hospitality, writes Judith Still, “is by definition a structure that regulates relations between inside and outside …. Someone or -ones, categorized as ‘outside,’ as not necessarily by right or legal contract part of the ‘inside,’ is temporarily brought within” (2006, 704). As a host, Simon remains the master of the house and defines the conditions of hospitality or welcome. As guests, Bilal and his friend cautiously cross the different thresholds and doors into Simon’s apartment. This first instance of limited hospitality will change as the movie unfolds, and Simon will finally administer the rituals of an unconditional hospitality, firstly by claiming the youngster as his son, and seconly by “replacing him” and going to London to meet his girlfriend. Simon’s initial gesture to impress his wife turns out to be more than the staging of an act of hospitality. By receiving and sheltering the Other, Simon’s self is called into question. In the process, all the routines that structured his life will be left behind. Bilal will never leave Simon’s life. Hospitality, Still writes, is more than a legal contract or a verbal agreement, for it is “overlaid with crucial affective elements” (2006, 704), and the guest and the host may be utterly changed by the experience.

But hosting a migrant does not go without consequences. Simon is immediately summoned to the police station. He finds out that, as his exwife warns him, “The police are watching everybody.” And the police department’s detailed report is an instance of a body politic that can be described as a Panopticon. The officer informs Simon that “[a]iding illegal immigrants is an offense.” Simon’s act of private hospitality runs against the state’s right to bar the entrance of a contingent deemed threatening. The rationale rests on the state’s right to interfere in the definition of what constitutes an authorized guest. It follows that the host’s house is a subset of the national territory. But the conversation also delineates two separate and segregated worlds, that of the citizens, enjoying the benefits of the polis, and that of the non-citizens, the denizens of the camp.

Additionally, the conversation lays down the parameters of hostility on the national stage. Not only is the nation inhospitable to the newcomers, but it also forces its own citizens to exercise the same kind of reception towards the alien Other. Some of these citizens, like Simon’s neighbor, have internalized this gate-keeping role as well as the vision of migrants as the abject. In a confrontation with Simon, he claims that immigrants have lice and steal. Migrants, not only inhabit the spaces of the abject, in Kristeva’s formulation, but are envisioned as the embodiment of the abject.

Lioret chooses to frame Bilal’s escape by juxtaposing the pool lanes and the waters of the English Chanell. From the lanes of the pool the camera travels to Bilal, swimming across the liquid line, and finally making out Dover’s white cliffs. That proximity is deceiving, for Channel is closely policed and is striated by national borders and demarcations. When the Royal Navy instructs Bilal to hold his position so he can be rescued, he turns back and drowns. The British authorities sent back Bilal’s body in a bag. Significantly, Bilal returns the same way he intended to depart from Calais.

Conclusion: Contact with the Other and the State’s Autoinmune response

In his act of responsibility towards the Other, Simon ends up carrying his own coordinates of exception and gradually becoming the political abject. The founding violence inherent to state making is directed not only to those considered “alien Others” but also to its own citizens as if in an autoinmune respose. The immune system protects the body against external threats, yet its efficacy hinges on its ability to differentiate between friend and enemy. In an autoimmunity crisis, however, an organism, “in a quasi-spontaneous and more than suicidal fashion” (Derrida 2005, 124), turns against itself. Derrida has transposed this malfunctioning of the body onto the body politic of the democratic nation-state. In his analysis of autoimmunity, it is democracy that destroys itself from within. For Simon, like for Bilal, hospitality now materializes as hostility within the autoimmune country.

Duvall, Raymond, Ayten Gündogdu, and Kartik Raj. 2009. “Borders, Power, and Resistance: Bounding and Challenging Europe.” In Europe and Its Boundaries: Words and Worlds, Within and Beyond, 223–41. Edited by Andrew Davison and Himadeep Muppidi. Lanham, MD: Lexington Books.