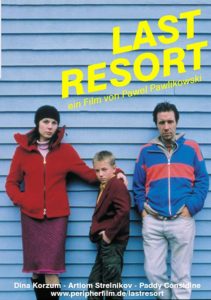 Although Pawel Pawlikowski, a leading contemporary film-maker, was based in the UK for much of his career, he is anything but a narrowly British film-maker. Born in Poland, he often turned to the old Eastern Europe for his early documentary works. More recently, he made The Woman in the Fifth (2011), a Paris-centred fiction, Ida (2013), a much praised work about antisemitism in Poland, and Cold War (2018), another Polish-shot film. His body of work and his own trajectory are clearly European or even nomadic rather than narrowly national in their scope (Rydzewska 2012, 92). It is perhaps for that reason that his films often probe questions of mobility, identity and belonging. When he films the UK, as in Last Resort, he is able to see it through an outsider’s eye, the eye of a foreigner for whom it may be a strange and indeed unwelcoming place. Positioning itself close to its migrant protagonists, his film shows how British borders have become places of selection and sorting as some are allowed to move freely while others are not. At the same time, he draws our attention to the state of contemporary Britain and the way it has ceased to be a welcoming society even for its own residents. If, because of their engagement with socio-political themes, we might feel tempted to label Pawlikowski’s documentaries and fictions realist works, we should remember that there is also a poetic or dreamlike quality to his work (Bardan 2008). Last Resort is a migrant’s dream of England but not necessarily a happy one.

Tanya (Dina Korzun) and her son, Artyom (Artyom Strelnikov) travel from Russia to the United Kingdom to join Tanya’s British fiancé, Mark, who is due to meet the pair at the airport. When he fails to arrive, desperate to stay, Tanya claims political asylum. She is taken with Artyom to Stonehaven, a decaying British seaside resort, and finds herself lodged in a grim tower block, alongside many other migrants. There, they are befriended by Alfie (Paddy Considine), a British man who runs an amusement arcade and calls the numbers during bingo sessions for old people. Although the resort still bears traces of its past as a holiday destination, it soon reveals itself to be more like a prison camp than a place of amusement. Tanya cannot escape and she and Artyom must live off the vouchers they are given as asylum seekers. In desperation, Tanya tries to earn money by working for an on-line pornographer but finds the work emotionally impossible to deal with. Finally, Alfie helps her and Artyom escape by ‘borrowing’ a sailing boat. The two make their way to the airport where they first arrived, now happy to awake from their British dream.

Borders and the refugee or migrant gaze

We tend to take it for granted that countries come first and that borders are a secondary phenomenon, merely confirming where the edges of something pre-existing lie. This is, of course, naïve. It is more accurate to see the border as something prior which allows the definition of what lies inside it and a sense of who belongs there. Seen in this latter way, the border is not simple a line but a process: we should perhaps talk of bordering to emphasize this active role (Thomas 2016: 5). Although, in the era of globalisation and the European Union, borders may seem to be disappearing (a debordering, rather than a bordering), borders still play a very active role of sorting and ranking, differentiating between those allowed frictionless movement, those permitted legal but restricted passage and those who are to be detained or turned back. Curiously, it is the latter who render the border and its processes most visible. This, in part, is the role of Tanya and her son in Pawlikowski’s film. For the tourist gaze (Urry and Larsen 2011), which many Europeans typically deploy as they move between countries, the border has little more than symbolic value as a marker of transition in a journey, a promise of a perhaps slightly delayed entry into a fresh location with pleasures and sites to be enjoyed. But for the migrant or refugee’s gaze (Loshitzky 2006: 752-4) the border appears as something different, as a perhaps impassable barrier and a place of inspection and interrogation. By keeping so close to Tanya, Pawlikowski invites us to adopt, as much as we can, the migrant or refugee gaze and look at the border differently. We are invited to become aware of fences and barriers and those who patrol them.

The effect of borders on human groups may seem abstract and impersonal. With its capacity to engage with individual lives and to track the movement of bodies in their interactions with locations and objects, film takes us back towards the embodied and the personal. We feel this from the start of Last Resort. When Tanya is stopped for questioning by an immigration official, her possessions take on new meaning. The fact that she is bringing her artwork and other personal objects becomes evidence that she is not arriving as a tourist. The little money she has with her is also evidence, this time of her precarious economic status. Her fox furs are held up as strange objects. Despite herself, she is being reclassified, not as a woman coming to find her fiancé, but as someone exotic and perhaps not desirable. Soon, she finds herself in a holding area, sitting next to a black woman. We are seeing the border’s active work of sorting and sifting and what is brought to the surface is that certain white Europeans, in this case Russians, are being positioned as outsiders, alongside non-European travellers, racialized in the way the latter have so often been (Bardan 2008, 52-54). In this way, the film points to how, in the era of apparently global flows, mobility is far from equally distributed and borders need to be reworked to reflect new dynamics. A recalcitrant subject, Tanya resists her immobilisation and categorisation as an illegal migrant by seeking to claim asylum. As a consequence of her claim, she finds herself behind reinforced glass, being photographed and receiving an identification number as if she were a criminal. Her face, the apparently most personal part of her, is objectified and becomes a marker of her outsider status.

The British holiday resort as camp

Tanya and Artyom are taken to the fictional seaside town of Stonehaven while her asylum request is being processed. Although the town still has features of the traditional seaside resort (the funfair, the arcade), it is also a place of imprisonment with fences, police and closed-circuit television cameras (CCTV). Significantly, the railway station is closed, as those inside the fences are immobilised. While Pawlikowski’s camera aligns us with the migrant’s gaze, the CCTV cameras embody the gaze of a repressive power which sees those it looks upon as potential criminals. Britain, the film suggests is becoming like a camp where those without citizenship do not have the right to have rights and are exposed to the arbitrary exercise of state power (Agamben 1998, 166-180). British citizens themselves might seem to be more protected but the Britain of the film is decayed and lifeless, qualities reflected in the film’s desolate locations, cold colours and dull light. Lyndsay Anderson’s famous short documentary, O Dreamland (1953), was filmed in the same location (the real town of Margate). Although that film was anything but enthusiastic about the nature of the massified popular leisure it recorded, it found a town full of British working-class people. In Pawlikowski’s film, the funfair is still there, but only the old people playing bingo, abandoned children, and a scattering of adult men appear to remain. Foster’s comments about other contemporary British migrant and refugee films also apply here: ‘Britain seems hardly less collapsed or atomised than the places the refugees have fled’ (2006, 691). The migrants and refugees, Foster also notes, confront us with a sense of ‘what it means to lose our place in the world’ (2006, 689), a threat which, in societies which offer us diminishing levels of protection, feels increasingly close to home. The sense of the decay of Britain’s social fabric takes concrete form in the tower block where Alfie lives and in which Tanya and Artiom are also housed. Tower blocks used to be a sign of modernity and of a potentially better life for the working class. But here the tower block is a grim, depressing structure, more reminiscent of stereotypical images of the old Eastern block and its brutalist architecture. This is one of the film’s underlying ironies: seeking a new life in the West, Tanya finds herself somewhere that evokes the East that she left behind.

The Britain that Tanya comes to is decidedly inhospitable. Rather than being welcomed on anything approaching her own terms, she is recategorized as someone exotic and unwelcome, her possessions re-signified as signs of her strangeness and the suspicious nature of her presence. Even when she is granted temporary asylum, it is on condition that she renounce her mobility and any right to work, a condition enforced by the threat of sanctions. Yet, on a more local, individual level, something we might recognise as a true hospitality respectful of her agency does occur. This happens when she meets Alfie. While the authorities effectively shut her in, he helps her maintain communication with the outside. He also redecorates and partially refurnishes the ugly apartment in which she has been housed. Unlike the authorities, he admires her artwork rather than using it to signal her difference. Finally, and again in contrast to the authorities and despite his clear romantic interest in her, he respects her wish to escape the camp-like resort and takes risks to help her leave. This hospitality-from-below serves as a reminder of the form a more adequate hospitality might take.