Bollaín, Flowers from Another World

Flowers from —this and— Another World

The processes of large scale rural exodus, deployed during the Industrial Revolution, peaked in the years of the New Deal and the subsequent policies of economic reactivation developed by the Welfare State governments. In Spain, a very specific context unfolded within this wider global scenario: the Spanish Civil War and the subsequent dictatorship of General Franco. 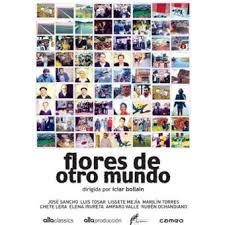 By the 1960s various Stabilization Plans tried to boost the Spanish economy through important investments and structural changes in the industrial and services sectors. This caused large groups of people, previously working in agriculture or the livestock industry to move to urban centres, both within Spain and overseas. Thus, this new framework designed for Spanish society as part of an unstoppable process of globalization, resulted in an almost complete emptying out of rural areas during the latter Francoist period, especially those areas furthest from the big industrial centres, mostly at the centre of the Iberia peninsula. By the time of Spain’s transition to democracy, in the late seventies and early eighties, the country’s demographic map revealed a very unequal geographical distribution due to these previous migratory flows. And it is at this crossroads where Icíar Bollaín’s film Flowers from Another World (Flores de Otro Mundo) is located; precisely at the moment when various initiatives — both public and private— finally recognize the phenomenon of Empty Spain. A time, indeed, in which Spain had stopped being a country of emigrants to become a recipient of, mainly Latin American, immigrants.

Flowers from Another World is the second film by Icíar Bollaín, a director who usually works with complex and very concrete social realities, but always from a broad point of view and with approaches that transcend those particular situations. In this 1999 film, the two major themes are the rural depopulation of Spain and the extensive processes of Latin American migration to the country in the Nineties, as well as loneliness and the need for rootedness. The plot refers to “caravans of women” which toured Spanish rural towns around 1985,[1] seeking to match single men in the area with women who, in general, were trying to precariously survive in the city. Additionally, in the case of Flowers from Another World, the profile of these women is focused on the international migrant community, making their reception in this new rural setting even more exceptional. Along with the women who come to these meetings looking for company, stability or a sentimental relationship, but who generally have some economic autonomy and, of course, maintain a regular legal status —that is they are Spanish citizens—, the film explores the configuration of other subjectivities like those of the racialized migrant women who find in these caravans a channel for alternative socialization which the system is not always able to guarantee them. And this is done, moreover, by putting the focus on gender constructions as a decisive element in the management of social inequalities.

Therefore, in the film, different worlds are crossed: the urban and the rural, the national and the foreign, but also the masculine and the feminine. Thus, the key issues of migration and racism are united with those of machismo and gender violence.

Patricia, separated from her husband, and accompanied by her two children travels from the Dominican Republic to Madrid, with the help of an aunt who resides in the Spanish capital. The living conditions of this city do not allow her to subsist even by working abusively long hours, to which is added the constant fear of losing her residence permit and having to return to her country. The debt she takes on with her former partner further aggravates this sense of helplessness, leading her to try to exploit marriage as a means to integrate into the social fabric and find refuge in a hostile environment. Spanish immigration law was, until the year 2000, one of the most restrictive in Europe, as it treated migration as a criminal rather than civil matter. The character of Patricia is one of the main devices the film uses to draw attention to this legalistic treatment of migration in the country. She instrumentalizes her relationship with Damián, one of the single men who lives in the town of Santa Eulalia. The aim is to acquire Spanish nationality through marriage and, in so doing, formalize the situation of her family in the country. In this way, the end becomes the means and the agent-subject in just one more cog in the regime of collective order used to sustain the basic principles of social being.

The environment of a town on the Castilian plateau (meseta), without a productive fabric and with an increasingly sparse and aging population, does not seem to be the perfect testing ground for an “experiment” in integration. The caravan arrives like a particularly exotic fairground attraction via the only road which links the town to the main national highway. Children run behind the bus, a band plays a paso doble as the locals follow the newcomers through the streets and, finally, the local single men receive their guests through a ceremonial arcade of roses. The picturesqueness of the sequence is underlined when a little girl touches the hands of some of the black women in astonishment as they get off the bus. The scene’s grand finale is the consummation of this first meeting in the town square, with a dance to a song with a line saying: “Contaminate me, mix with me, as under my branch you will have shelter” (“Contamíname, mézclate conmigo, que bajo mi rama tendrás abrigo”). However, the welcome sign: “Hello, make yourself at home” (Hola, estáis en vuestra casa), does not succeed in its intentions. The (dis) encounter with the other is represented in the innumerable scenes within the plot where cultural clashes trigger small conflicts: how to cook beans, styles of dressing, the order in which duties and affections are prioritized, and almost any everyday act in which the characters are involved. This rejection of the other, the alien, the unknown, that which diverges from the socially constructed habitus, will dominate most of the interpersonal relationships displayed in the film. The confrontation of different visions of the world will be resolved in different manners: from the negotiation based on affection which Damian’s mother and her new family will end up establishing, to the contempt with which Miladi is treated, the Cuban woman who arrives after the caravan in order to take advantage of the status that Damián offers.

This gratuitous violence in response to the strange is also focused on that “Alterity” constitutive of our system of social organization that, according to Simone de Beauvoir, the woman represents: “The woman as the inessential, the absolute Otherness without reciprocity” (2005: 211). Moreover, it is directed against a subaltern social group through a triple process of exclusion: “When that black woman got up to speak, her response to those macho men also contained an instructive lesson for white women. By repeating her question ‘Am I not a woman?’, on no less than four occasions, she exposed the class prejudices and racism that permeated the new women’s movement. Not all women were white and not all women enjoyed the material comfort of the middle classes and the bourgeoisie” (Davis, 2005: 71-72). Of the three protagonists of the film, Marirosi, Patricia and Miladi, only the first has a dominant social position: she is an emancipated white woman, with a high professional profile and full autonomy. However, Patricia does not manage to support her children with the multiple jobs she has been juggling as a salaried employee and, for that reason, her marriage to Damián is not a means of entry to a higher social class, but simply to the terrain of normality. Miladi, with even darker skin and a rebellious character, will be excluded from tolerated diversity. The spaces occupied by each group also speak to us of those boundary demarcations between the norm and its transgression. Therefore, when this last character dares to “invade” the masculine world, helping the owner of the bar, she is rejected and relegated to the realm of the domestic, the care of the house, the private, as opposed to the public position of the dominant male. To be accepted, you must fulfil the assigned role.

This is the classic pattern of conditional hospitality, which, as Kant said, we have the duty to offer but only when the guest behaves in a friendly way, that is, when he ceases to be another and becomes one: “hospitality (Wirthbarkeit) means here the right of a foreigner not to be treated hostilely by the fact of having reached the territory of another. The latter can reject the foreigner, if it can be done without ruining him; but if the foreigner behaves as is required by his position, the other cannot treat him with hostility” (2016: 95). Patricia’s mother-in-law only likes her when she assumes standardized behaviours for rural Spanish women. Marirosi remains a perpetual guest by not accepting life in the countryside; or, rather, Carmelo, the single man with whom she begins a relationship, puts her in that place after her repeated refusals to exchange the roles of guest and host. Miladi roundly rejects the persistent attempts by Alfonso, the prototype of a dominant masculinity, to mould her into his ideal of a wife. Each one of these women will accept or reject the limitations placed on their reception by the established codes of behaviour. What is at stake here, therefore, is a hospitality governed by acculturation and assimilation to a specific imposed normalcy.

For this reason, the underlying metaphorical question of the film is about the implications for the different represented subjectivities of putting down roots in contexts which are, at least to some extent, hostile to diversity. In the end, what the film seeks to do is to question the interpersonal exchanges and agreements we have access to when our position is defined by inequality and vulnerability.