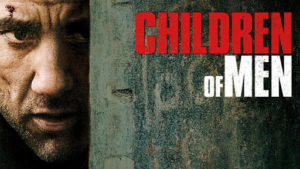 At the beginning of his book Capitalist Realism, Mark Fisher uses the Children of Men to start off his marvellous essay, affirming that “what is particular about the [film’s] dystopia is that it is specific to late capitalism”. In fact, insists Fisher, “when looking at Children of Men, we inevitably recall the phrase attributed to both Fredric Jameson and Slavoj Žižek: it is easier to imagine the end of the world than the end of capitalism” (Fisher, 21-22). The recently deceased English critic thus placed the framework of interpretation of the film around temporal paradoxes, that is, the possibilities or impossibilities of future and novelty in contemporary political, economic and cultural systems, themes diagnosed earlier by Fredric Jameson in his classic Postmodernism, or, the Cultural Logic of Late Capitalism. Now, if we continue with such a reading, giving the film a central theme of the new and the future, perhaps its greatest originality may be lost, namely, the management of spaces in an era of problems of the future. Not only time, then, but also, and above all, space shows its inversions and contortions here. In fact, surely this is the great question, appearing in different versions throughout Cuarón’s film: how is space distributed when time runs out? What would happen in space if the new time belongs to the other? What would happen in the liminal spaces, in the dialectics of hospitality, in the management of place, of the border, and of the immigrant, if the new race is born of an other, of a refugee?

Children of Men is set in a future time, not very distant from ours, in which human beings have lost the ability to have children. Serious immigration and social order problems coexist with desires for security and order in an England that, in spite of everything, seems to have become the last retreat for asylum seekers, despite its militarization. In this context of global infertility, an ex-activist Theo Faron, now a hopeless, melancholic bureaucrat, after having lost his son in a flu pandemic, lives his life between nostalgia and desolation. When his ex-wife, Julian, a member of the resistance and an activist leader in favor of refugee rights, contacts him to ask for his help, Theo becomes involved in actions that could change the world he inhabits. Thus, what seemed like a simple procedure to get transit papers for a refugee, Kee, becomes for Theo – after multiple complications and betrayals, including Julian’s death – a desperate attempt to protect the young immigrant, who is heavily pregnant and quite close to giving birth. Overcoming all kinds of dangers and setbacks, with the help of other refugees, to save the new-born girl and her mother, Theo and Kee manage to escape from the fighting and bombing with the baby girl alive and well. The final scene, in a flimsy rowboat surrounded by a foggy sea, presents the viewer with Theo’s death (but not before teaching Kee how to pat the baby on the back to calm her crying) as her mother observes the approaching rescue ship, with the symbolic name of Tomorrow.

The referencing of the ship’s name to the future and, therefore, to the possibilities of life, seems to underline the weight of time, but in reality the film speaks of spaces, of crossing liminal spaces and frontier posts. Indeed, the small gesture of maintaining the ship’s name is one of the few concessions, apart from its central premise, that Cuarón has made to the novel on which it is based. Because the fact is that if the novel by P. D. James is a work on time and its possible end, Cuarón’s film is rather a means of intervention which places the management of space at the centre of a novel about time. Whereas in the novel there is hardly any talk of refugees, Cuarón’s adaptation perceives global infertility through the lens of refugees and political asylum. In fact, it could be said that Children of Men is a 2006 film by Mexican director Alfonso Cuarón who, rather than adapting, intervenes or post-produces a 1992 novel by the British writer PD James. Of course, the dates of the two works, as well as the places of origin of their creators, are not mere details: little more than a decade apart in time, they are nonetheless, from two worlds, separated by a much greater distance in time than that which distinguishes our post-Brexit Europe from the Europe represented by Cuarón (the year 2025). Indeed, if anything, the film’s dystopic characterization of Europe seems more similar to the Europe of today than that of its original version in the novel by PD James.

For all this, and apart from the general thematic modification, the slight amendments made by the director to the novel are very symptomatic: in the novel, Theo is a professor of History, in the film an office worker; in the novel, Theo has a daughter, not, as in the film, a son, whom he kills by accident; in the novel, Julian is not Theo’s ex-wife, but a sporadically present student; in the novel, some deer are surprised in a field, whereas in the film they are found in the ruins of a school; in the novel, the young mother is not black, but the midwife is; in the novel, the highly anticipated baby is a boy, not a girl; in the novel, Quietus is not a suicide kit, but group murder / suicide ceremonies; in the novel, Theo’s cousin is the Guardian of England, not a minister with art collecting functions; in the novel, there are no transit papers and refugee problems, but constant allusions to the Omegas, the last generation of beautiful and violent humans, and so on. Although the novel presages its cinematographic representation – “only in the cinema or in television programs can we see the bright images of young people “(James, 20); “You are able to reduce everything, even this, to the level of a cheap movie” (James, 223) -, its difference is such that it is already part of the plot: if the novel is the announcement of an end and the hope of a new epoch, the film is the proclamation that the new time is the time of the other, of the space of the other.

Times of the Other, Spaces of Transit.

Much more than details, these slight changes seem to represent not only the change of eras and of times between the novel and the film, but, above all, a way of introducing space and the other into time management. Hence the importance of roles, transit papers, and their consequences: crossing spaces, crossing borders, thanks to the hospitality of smugglers and refugees. Children of Men, Cuarón’s film, is not a modern version of “the last will be the first”, but, rather, the verification that, when time is of the other, space is transit. It is an affirmation, but also a protest, a claim that demands actions and displacements in the face of the loss of one’s own space. Thus, placed in the time of the other – understanding the expression, of course, in the meaning that refers both to the other as the theme of our time, as much as to the daughter of the refugee who has to start the new time -, it is not surprising that the film constantly references movements: escapes and chases, cars and boats, tunnels and stairs. Imagining the future is to imagine its spaces and the relationships between them. Cuarón shows again and again what the actual spaces are and the difficulty involved in traversing them. Be they physical roles or places, it is as if the renunciation of transformation prevents us from adapting to the malleability of times and situations. Only when such violence of the expected collapses, in this case through a global infertility epidemic broken by a pregnant black refugee, do possibilities seem to appear.

We say possibilities, but, in reality it is but one possibility, that of Kee and her daughter, the first child born in years. Children, future, possibilities, imaginations … all these go together, yes, but for its operation the one needs the other, the foreigner and the stranger. Basically, this is the great discovery of Cuarón’s intervention in the novel by PD James: to turn the issue of the new and the question of the other into a single issue, to express openly the fact that the current political and economic system manages cultural merchandise and human merchandise in similar ways, or, at the very least, through a parallel treatment.

Children and the New

“It is evident that we must metaphorically read the issue of infertility […] The question that the film asks us is: how long can a culture survive without the contribution of the new? What happens when young people are no longer able to produce surprises? The suspicion that the end has arrived is connected in Children of Men with the idea that perhaps the future only gives us reiterations and permutations” (Fisher, 23-24). Although such a reading, again, seems to avoid the question of the other and of space, Fisher’s idea remains fundamental. In fact, perhaps it can be completed by introducing, precisely, the allusion to the stranger. The question that lies behind Fisher’s interpretation is the doubt about whether a life is possible without surprises, without ruptures, without the “shock of the new”. And it is true that the absence of the new not only deprives the future, as Fisher maintains, alluding to Eliot – not only through an obvious connection with The Wasteland, but also with the Eliot of “Tradition and the Individual Talent” -, but also deprives the past, as without novelties to challenge it, tradition makes no sense. Hence, for example, the strange decontextualization that the presence of Algie, the flying pig of Pink Floyd, entails in an important scene in the film.

Indeed, perhaps it could be said that this reference, in cultural terms, with the exhaustion of the new and, with it, the loss of ruptures and interruptions, assumes a more complex meaning if we introduce Kee and her daughter into the allegory. It is the immigrant who interrupts, it is the daughter who leads the fracture and generates the anomaly, it is the stranger who welcomes the possibility of imagination. The other and the new in this way seem to include the necessary reference to childlike feeling; because the territory of childhood is the territory of the imagination and of the future, a territory, we must not forget, of the childlike gaze, where differences may have to do with many things, but usually not with problems of hospitality.